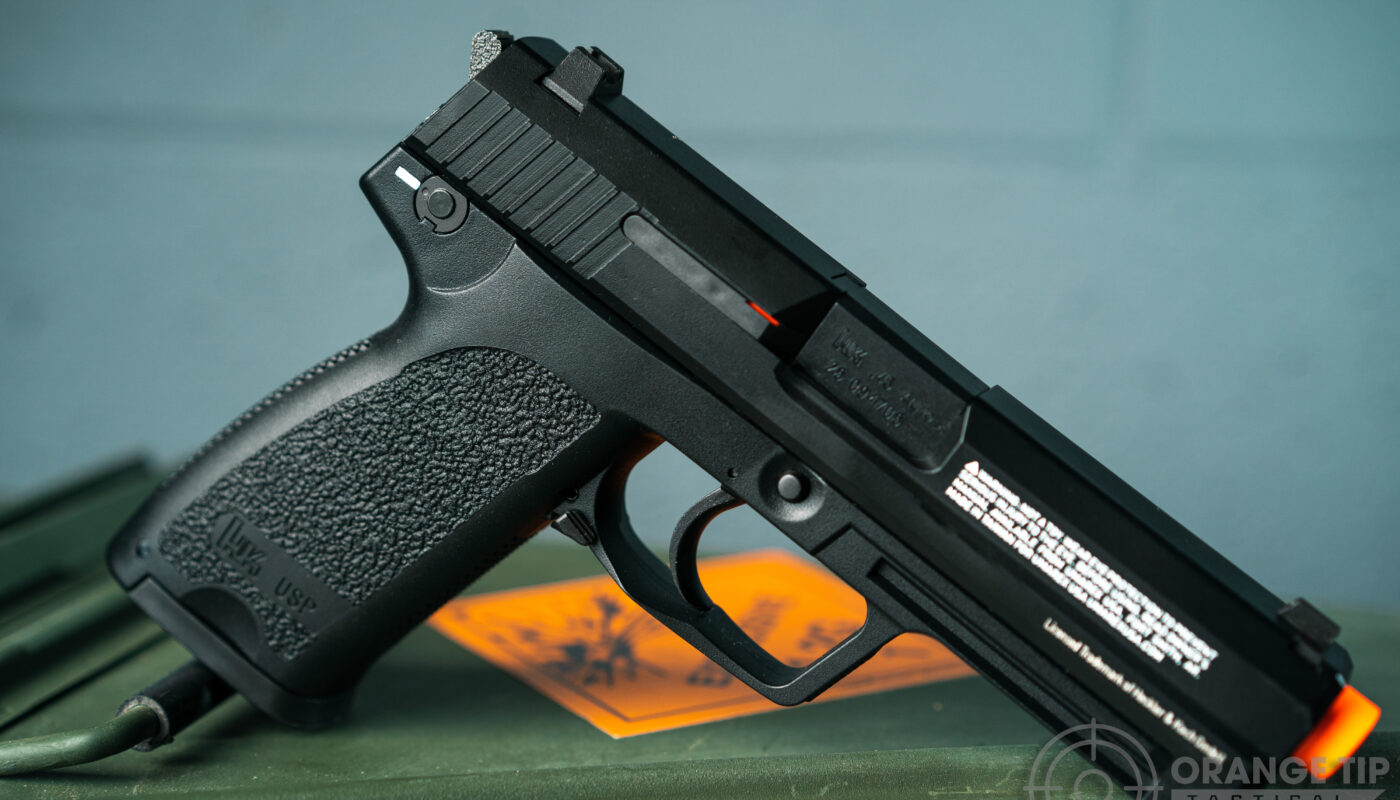 In the real world, H&K’s name is synonymous with quality…

Albeit often at the expense of your poor, poor wallet — and that’s if you can get a hold of their wares as a civilian, to begin with!

Considering the German titan’s selectiveness about who they license to, we wanted to find out if Elite Force’s gas blowback replica of the full-size USP .45 is worthy of the iconic HK monogram!

On the fence about grabbing this thicc GBB pistol?

Hopefully, the information here will help you make an informed decision. Onward!

The USP, or universal self-loading pistol, was first conceived in the late 80s. It was initially aimed at American recreational and law enforcement markets.

In fact, the Mk23 Mod 0 made famous in the Metal Gear Solid franchise is essentially a modified USP .45 for USSOCOM during the Offensive Handgun Weapon System trials!

The German Bundeswehr would later go on to adopt the 9mm USP as the P8.

And the full-size “tactical” variant of the USP .45 was dubbed the P12 with slight modifications to the designs of both to meet the needs of “big army” units.

There are many more USP iterations IRL than we have the space or desire to cover here. But hopefully, you get the point.

The gun’s become a well-renowned staple as both a military and LEO sidearm, as well as beloved in the competition and casual shooter scenes the world over!

The real steel version has an incredible reputation, but how does the Elite Force version stack up?

While I’m sure all of us have had that momentary feeling of disappointment when we pick up an airsoft gun and, for lack of a better term, it feels like a “toy.” Which to be fair, it is!

However, if you’re reading this review, you’re likely looking for a replica with the heft of the real deal – and thankfully, Elite Force provides 😎.

The USP feels fantastic in the hand. It’s heavy enough to feel substantial but well-balanced in a way that ensures it doesn’t feel unwieldy. Basically, what we want out of our gas blowback pistols!

For reference, the full-sized USP is pretty damn big compared to a lot of other options on the market. Be aware, a compact GBB this is not!

With the slide itself coming in at right around ~8 inches or so, it’s easy to see how the USP was tweaked into the even larger MK23 for the aptly named Offensive Handgun project.

But rest assured that we’re not quite in Desert Eagle territory in terms of chonk!

The USP .45’s frame is made from injection-molded polymer and features ample texturing on the pistol grip itself. This ensures you’ve got positive retention when punched out.

As to be expected with any semi-modern handgun, you’ve also got a rail upfront for accessories, such as lights or lasers!

The USP is a double-action GBB, a large external hammer sits to the rear, and can be fired when in the “down” position through an extra-stiff initial trigger pull.

Its safety also doubles as a decocker if you’d like to drop the hammer safely without pulling the trigger. This is a crucial feature on the real USP that’s been faithfully recreated here!

As one might expect, the USP’s slide locks back on an empty magazine, giving you an obvious visual indicator when your mag has run dry!

The slide lock lever sits just above and after the trigger, right above your magazine release.

Speaking of! Perhaps one of the most unique features of this beast is its faithfully recreated European “paddle” style mag release. Two small, downward tabs just to the rear of your trigger housing must be pressed downwards to ditch your mag.

While this might be a bit strange to get used to if you’re accustomed to more contemporary designs, with a little practice, you’ll be losing expensive gas magazines with the best of ’em in no time! 😉

We jest, but this mag packs more than enough gas to keep you going in the heat of airdork mortal combat!

Gas gun performance is always going to be limited by atmospheric conditions. But on average you can expect to get 1 to 1.5 mags worth of plastic down range on one fill of green gas in temperate weather — sometimes more if it’s hotter, sometimes less if it’s cooler.

If your wallet can sustain the hit, you’ll definitely want to pick up a few extra magazines to make sure you’re not fumbling with green gas cans mid-game.

The good news, however, is that there are indeed CO2 magazines available if that’s your jam!

CO2 can be a mixed bag, but on average a 12g cartridge is going to give you a hotter shooting gun and more BBs per fill. Although that’s off the cuff and certainly not a rule, it’s nice to know you’ve got options if you’d like to experiment!

Sure, it’s got a decent amount of features, solid heft, and a robust feel in the hand – but a GBB isn’t any good if you can’t make accurate hits reliably, right?

Luckily, that’s no issue here either!

Built on the venerable NS2 gas blowback system, the full-size USP .45 is hitting right around ~340 FPS out of the box as measured with a .2g BB and green gas.

If you’re at all familiar with gas blowback systems, you’ll know that this makes the gun perfect for the close-up environments you’re going to encounter in CQB (and FPS limits as well).

However, the gun also features an adjustable hop up that’ll allow you to sail shots in at longer ranges and pick off the foe!

Located just inside the chamber and adjustable via an included tooth ratchet tool thing, you’re going to want to set your BB trajectory before hitting the field. But once you’ve got it dialed in with your chosen BB weight, it’s going to stay put!

We were able to get accurate shots out of the USP .45 up to about ~50 to 75 feet away. Certainly not up to AEG range, but it’s not intended to be either.

In short, it’s hitting right where you’d want it to, and where you’re most likely to hit engagements with a gas blowback pistol!

Sure, the USP .45 performs great in its stock incarnation, but what’s the fun in that?

As a wise man once said, “It’s got rails on it, and you should probably use them.” Probably.

Holster: Assuming you’re not using this beast as a primary, you’re going to want somewhere to stash it when not in use! While they may be a bit Gucci, our money is on Safariland every time. You might need to make sure you’re picking up the right model if you’re going to wind up throwing a LAM or light on the gun. But in general, this SLS Dropleg has our bet for making sure your gas blowback USP stays put — even with all of the acrobatics, jostling, bumps and spills one might encounter in-game!

Light: A light is easily one of the most functional add-ons one can snag right off the bat for their handgun. Again, though spendy, our money’s on Streamlight’s TLR-1 HL for absolute photonic devastation! At right around 1,000 lumens, this light’s an absolute beast that’s meant for the real gun market, but will fit right on that USP rail with no fuss.

During our T&E phase with the USP, we suffered no failures to feed or other hiccups whatsoever! Given the somewhat finnicky nature of gas blowback platforms, we were quite impressed. But OG’s that remember KWA’s NS2 engine this gun is running a legacy version of won’t be surprised. It runs!

The USP is about as accurate as a stock GBB pistol can be — easily landing hits on a man-sized target at up to 75 feet! While this is going to suffer if your target is moving, rest assured that for most typical handgun engagements, the USP’s going to perform if you are.

Although this one’s always a bit rough considering the general range limitations having such a small inner barrel bestows upon your gun’s performance, we can’t fault the gun for that. As mentioned above, it’ll do the job a sidearm is meant to do. But players looking to hit the field with the USP as their primary may find themselves outranged by stock AEGs!

The light, crisp trigger pull in single-action mode means that you’ve got fast, repeatable follow-up shots that’ll have you double-tapping your airsoft enemies with the speed and accuracy of an Elite Plastic Warrior™. What does that mean? If you have to ask…

Those sporting some serious bear paws are going to find the USP quite comfortable we imagine. And given the fact that I’m right around a medium/large glove size depending on manufacturer, the USP is right on the cusp of what I’d say is a little too large to really feel useable. But it manages! If you’re on the small side, perhaps check out the USP Compact instead.

It’s got full HK trades all over the place. And it brings a huge, offensive-looking replica of a beloved handgun. What more could you want?

While the USP family doesn’t quite have the number of aftermarket accessories floating around out there that other makes of GBB pistols do, it’s still pretty decent. Although we haven’t had the opportunity to test too much ourselves, word on the street is that certain real-steel addons should work as well! Keep in mind that that’s never a for sure thing when you start crossing streams. But the prospect has us itching to test some stuff out. Stay tuned!

Beefy, humongous, rugged, and reliable…if that’s what you’re after in a sidearm, no matter what your style of play or level of experience, Elite Force’s take on this German Classic has our full endorsement 😎